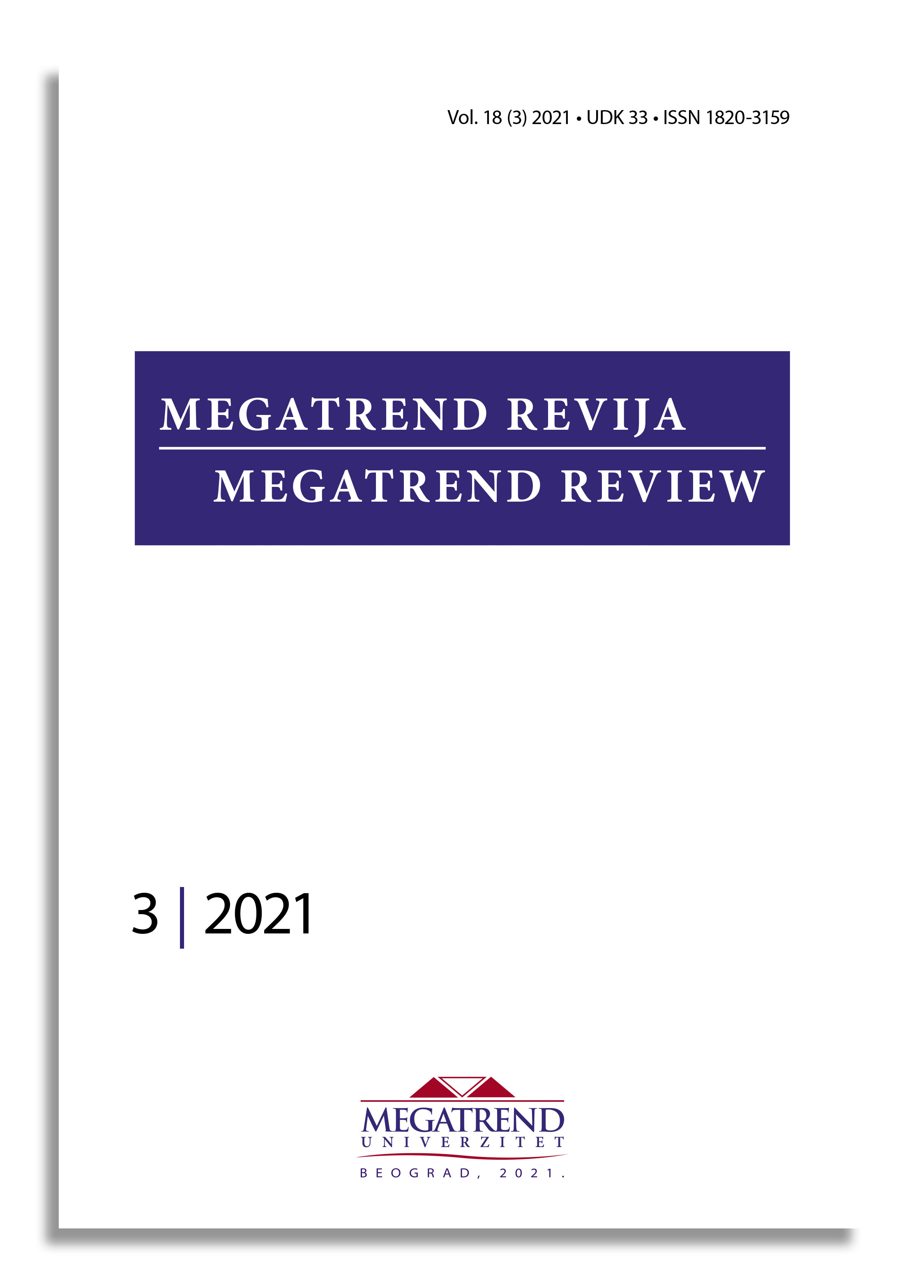 GENERAL INFORMATION ON THE JOURNAL

AND THE INSTRUCTIONS FOR AUTHORS

I. GENERAL INFORMATION ON THE JOURNAL

1. General. – ’Megatrend Review’ is the scientific journal of Megatrend University.

According to the classification of Ministry of Education, Science and Technological Development of the Republic of Serbia, the journal is ranked amongst the leading national scientific journals in Serbia (M51).

’Megatrend Review’ journal is a multidisciplinary journal in the fields of social sciences. Papers on following topics are published:

• Example of the manuscript

2. Reviews. – Each paper is reviewed by two reviewers.

The paper that has received two positive reviews will be published according to the standard categorization of the scientific journals: Original scientific paper, Review scientific article, Expert article, Preliminary report or overview, Translation and Book review.

The categorization of the paper is determined by the reviewers and Editor in chief. If there is any doubt regarding the categorisation, the given higher category will be applied.

In case that one of the reviewers suggests that the paper should be published and the other that it should not, the paper is given to the third reviewer whose decision is final.

4. In order to prevent plagiarism, before their publication in the journal, all accepted papers will be checked using the CrossRef iThenticate system within the SCIndex Assistant service. The results obtained by the audit are verified by the Editorial Board of the journal in accordance with the guidelines and recommendations of the Committee on Ethics of Publications (COPE).

The papers are to be regulated in accordance with the following instructions:

The manuscript is submitted in electronic version (MS Word), Word 97-2003 Document. The papers written in the Serbian language are submitted in Serbian Latin.

The paper is submitted in electronic form to the following e-mail address: This email address is being protected from spambots. You need JavaScript enabled to view it.

The paper should be accompanied by the written Statement of originality signed by the author (written, signed and scanned).

The requirement for the paper to enter the reviewing procedure is that it fully satisfies technical criteria according to the instructions given here. Also, the paper must meet the criteria regarding the language and spelling. It is of utmost importance that the paper has been lectured before submission.

As a rule, papers written only by one author are published (an author as an individual). However, if consider justified, the editors will decide to publish the papers of co-authors, but not more than 3 co-authors.

The text is submitted in Serbian or English language. If accepted, it will be published in the language in which it was submitted.

Exceptionally, the editors will decide that the text submitted in the Serbian language is to be translated and published in English, or vice versa.

The paper should approximately have 30.000 characters, including spaces (1 author’s sheet). Alternatively, it could be shorter or longer, the number of characters with spaces not being smaller than 20,000 nor bigger than 45,000.

Due to particularly justified reasons (the special social importance of the topic, the co-authorship of a number of internationally recognized scientists, etc.) the editorial board could exceptionally allow the publication of an article of a larger volume, but not larger than 2.5 author’s sheets (75,000 characters).

The tables should only be made by the means of table tools in MS Word. The tables must have titles and be numbered by Arabic numerals.

The formulae should be written by means of the formulae editor in MS Word.

Drawings can be submitted drawn on paper or in electronic form. When the drawings are submitted in electronic form, they should be in one of the following formats: EPS, AI, EPS, TIF or JPG. If the author uses these or uses a specific program, it is necessary to agree on the format with the technical editor. The drawing should not be made in MS Word!

Photographs must be sharp, in good contrast and undamaged. The authors are not advised to scan the images themselves, but to leave this sensitive job for the editorial office.

If the version of the paper does not include drawings and photographs, the spaces must be clearly marked where they should be inserted. The markings in the text must match the ones in the submitted photos (or files).

Drawings and photographs must have the signatures and be numbered in Arabic numerals.

2. Title of the paper. – The title should be clear and precise.

3. Abstract. – A Summary (abstract) is a brief informative overview of the paper that enables the reader to quickly and accurately assess its relevance. The constituent parts of the Summary are aim of the research, methods, the results and the conclusion.  In terms of volume, it should contain 100 to 250 words or 4 to 8 sentences or a third to half of the printed page. It stands between the title and keywords, after which the text of the article follows.

4.  Keywords. – The terms or phrases which best describe the content of the article. It is allowed to give up to five words, i.e. phrases.

The list is given according to the Citation instructions, with the year of publication coming right after the author’s, i.e. editor’s name. At the end of the information on an article or a paper in the collection of papers, the pages of the cited paper are given.

- Cassese Antonio (1999a): “Ex iniuria ius oritur. Are We Mowing towards International Legitimation of Forcible Humanitarian Countermeasures in the World Community?”,European Journal of International Law, 1/1999, 23-30


7. Summary. – A summary is written at the very end of the text i.e. The resume of the paper can be same as the abstract, but could also be of a bigger volume, yet no longer than one page. If the paper is written in the Serbian language, the summary in the English language should also be submitted.


8. The levels of the titles. - Depending on the text, the titles have different levels, therefore, the following method is used:

(Above the beginning of the paragraph, italic, Arabic numerals.)

In order to clarify any obstacles, authors are advised to refer to the past issues of ’Megatrend Review’ journal available in PDF forms, under Archive, or contact the Editorial secretary via e-mail.

Depending on the specific characteristics of the text, and with the aim of achieving its clearer outlay, the editorial office reserves the right to edit the titles in a slightly different way, leaving the original heading divisions.

9. Citations. – The used literature is to be cited according to the instructions for citations given below.

10. The editorial staff address. – The papers are submitted in electronic form via e-mail to the following address: This email address is being protected from spambots. You need JavaScript enabled to view it.

e-mail: This email address is being protected from spambots. You need JavaScript enabled to view it.

If there are more than three authors, only the first author’s surname and first name are specified, followed by the italicized et al. words ( et alia).

5. The repeated citation of the same article. – When an article that has been cited before is recited, the author’s surname and first name are specified, followed by the cited page, separated by a comma, without using op. cit. etc.

If several papers by the same author are specified, the author’s surname and first name are stated. Following in the brackets: the year when the paper has been published, followed by the number of the page.

When specifying several papers written by the same author, published the same year, in the list of used literature (which is always given at the end of the paper) and after the year of publication, the papers are additionally marked by Latin letters ’a’, ’b’, ’c’, etc. They are also stated as such when cited in footnotes.

6. Recitation of the previously cited article. - If a piece of data from the same page of the same paper cited in the previous footnote is cited again, only the Latin abbreviation Ibid. (from ibidem) is used without giving any other data.

If a piece of data cited in the previous footnote is cited again, but from a different page, the Latin abbreviation Ibid. is used, followed by a comma and the number of the page.

7. Foreign names. – Papers submitted in Serbian language, foreign names are transcribed, i.e. written as they are pronounced in Serbian, and when first mentioned in the text, the author’s surname and first name are given in their original form within the brackets in italics.

1.General. – The books are cited in the following way:

1) author’s surname, 2) author’s first name, 3) semi-column, 4) title of the book in italics, 5) place of the publication in lowercase (ordinary letters), 6) the year of publication, 7) number of the page (without any additions),

8) footnote which is being cited. After the space for publication, there is no comma.

If the information on the publisher is given as well, it is written in lowercase (ordinary letters) before the place of the publication.

3. Editors. – If a book has one or more editors, the editors’ surnames and first names

are given first, separated by commas, then the sign ’ed’, or ’eds’ is written if there are more of them, followed by the title of the book in italics, and finally the place and year of publication.

If there are more than three editors, the data only for the first editor is given followed by a comma, then ’et al.’, and finally ’ed.’.

1. General. – The articles are cited in the following way:

1. General. – Regulations are cited in the following way:

2. If the regulations are re-mentioned. – If a regulation is mentioned again later in the text, at the place where it appears for the first time its short title is given within the brackets, with the words ‘hereinafter referred to as’ preceding it.

3. Amendments. –If a regulation has been changed and amended, one by one, the numbers of issues and year of the journals are given in the original text, i.e. amendments were published.

We kindly ask the authors to take into consideration the following:

2. The paper that has previously been published elsewhere. - If for any reason the author submits the paper that has already been published elsewhere (abroad, in a foreign language), he/she is obliged to specify where the paper was published (the journal, issue and number, the number of pages) and enclose the written consent of the editorial board of the journal in which the paper was originally published. If these requirements are met, and editors conclude that the paper is for some reason of particular interest and should, therefore, be published, it will be published with the indication where it was published first and that it is republished with permission.

3. Plagiarism. - Should the editors of ’Megatrend Review’ journal or through reviewers discover that the paper submitted for publication is plagiarism, in a special section of its next issue the information that a particular author has plagiarized a paper will be published, and the original paper from which the plagiarism is taken will be cited. In addition, the papers by the same author will be not be published in ’Megatrend Review’ in the future. If necessary, the author whose paper has been copied or the editorial board of the journal that has published the original paper will be notified.